During these days I'm working on a pan-tilt servo based mechanism for my FabAcademy project. As the course requires quite a lot of 3D modeling I'm learning some procedural CSG packages for building technical models, and find OpenSCAD the best tool for this task.

I discovered the very useful MCAD library for OpenSCAD which contains many useful ready to use parametric objects.

The library also contains a Servo module, but for a different model of motor than the one I'm using, so I decided to write my own module for it.

About the Hitech HS-311: it is a cheap but effective motor, doesn't vibrate much and is not noisy. I'm still working on the project so I'll have more info about it later. 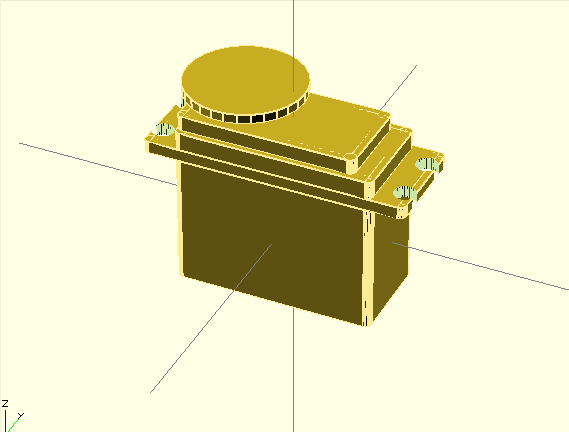 The OpenSCAD module was built taking actual measurements from the motor, everything is parametric so you can even tweak it for adapting it to other specific models.

You can find the full module on the hs-311 openscad github repository.